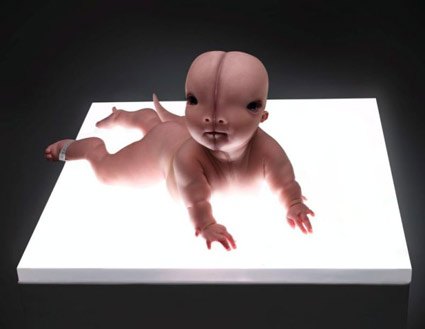 Let's see, how do I put this...if you like crazy sci-fi-horror, or if your idea of a good time at the movies is Jeff Goldblum's The Fly, or if you thought Species would have been better with more tentacles, or if you were able to eat popcorn and still watch David Cronenberg's Dead Ringers, then your cinematic experience du jour has arrived in Splice.

Here, two hotshot biochemists again sorely underrate nature's ability to adapt and develop into all forms and manners that their egotistical intellects failed to fathom. Adrien Brody and Sarah Polley are fine as overconfident, grungy cool nerds who splice their new slug-like species - which resemble semi-cooked loaves of wheat bread come to life - with human DNA. A few days in an incubator later, and ta-da - meet Dren, a rapidly evolving she-being who's part bald Victoria's Secret model and part hooved creature with a talon you don't want to be poked with. Oh, and she has wings, which come out only when she's super excited.

What kinds of trouble do Dren and her vastly idiotic - if not quite book-dumb - parental figures get into? You might not want to see...but if you do, the finale - sort of the genetic shootout at a rundown family farm - has some seriously messed-up scenarios that will shock and disburb you and possibly tickle your absurdist funny bone. I laughed simply because I couldn't believe the filmmakers were actually going to go there. When Brody's character spouts, "we've crossed a line," you'll also be saying, "ya think?"

Again, if creepy sci-fi is your brand of amusement, you'll find much to love in Splice. I'm not sure it's good - there are plenty of plot holes, and since when do scientists dress like oucasts from Good Charlotte - but I did laugh and my friend Alex and the rest of the crowd seemed to get a jolt from the extreme ickiness on display. One sequence in particular - you'll know which one - is definitely worthy of some sort of cinematic award...to which I'd say...dude...was it the wings?

In the annals of disturbing sci-fi horror movies, I'd rank this one up there with Scanners, Event Horizon, Videodrome and Altered States, but since it's kind of funny, too, I'll still go with those for straight disturbing. For disturbing horror, I'm putting Wes Craven's original Last House on the Left and Haute Tension at the top of my list - both films so sickening I nearly had to walk out. How about you? Most disbturbing sci-fi horror or horror? Your thoughts on where Splice ranks? Let me know in the comments below...

New Clips and Trailers for Harry Potter, Eclipse and More

New Clips and Trailers for Harry Potter, Eclipse and More