Day 26: 'The Girl with the Dragon Tattoo' 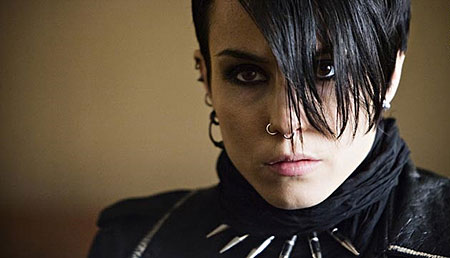 Day 26 was yet another surreal movie day. I'd had plenty of sleep over the Memorial Day holiday, so exhaustion didn't factor in, and my brain's feeling less throbbish, but sometimes, like Forrest Gump says, you never know what you're gonna get.

Here's what's good about the Culver Plaza Theater in Culver City. It's not packed (at all), tickets are only $5 and there's plenty of free parking. They require you to validate, but as far as I could tell, nobody's been manning the parking booth for months.

The bad news: nobody's been cleaning the auditoriums for that long either. After finding out today's screening of Kites (I'd picked the Bollywood film for its surprising showing in last weekend's top 10) would not screen since I was late and no one bought tickets, I settled for The Girl with the Dragon Tattoo - a Swedish thriller I knew little about, but had heard is garnering rights interest from Ridley Scott and Martin Scorsese.

Before the film started, I wasn't sure I'd be able to make it through. My OCD-impaired senses could barely handle the half-empty popcorn boxes strewn across the aisles, and the uncomfortably warm temperature inside the auditorium. I and the two other patrons – a twentysomething film buff and an elderly lady – managed to soldier on, but with Sony Pictures right across the street, you'd think some rich executive would have demanded an upgrade.

It's a good thing we stayed. There's a reason celebs from Brad Pitt to George Clooney to Kristen Stewart and Ellen Page are rumored to be clamoring for roles in any kind of remake. The film – based on the first part of a trilogy of books by late Swedish author Stieg Larrson – is some kind of indie wonder.

I won't give away too much, but it's basically a mystery involving a reporter and a twentysomething punker who team up to solve the disappearance of a 16-year-old girl forty years earlier. While it's fairly graphic in its depiction of sexual abuse and violence, there are enough hooks to easily see this as a streamlined, commercial hit – sort of equal parts Silence of the Lambs, The Accused and La Femme Nikita mixed in with The Matrix and The Da Vinci Code. Some of the hardcore evilness of the bad characters – probably heightened by the deteriorated environment I watched it in – got to me, but I admired the storytelling on such a small budget. In the hands of the right filmmaker, this could make for further great cinema, along the lines of Christopher Nolan's version of Insomnia…Care to check it out? Or up for the big budget version? Or hoping Hollywood will leave well enough alone?