I don’t even know how many movies I’ve watched over the past 100 days, but I can certainly tell you that it’s not even close to 100. That’s what makes this particular task so spectacular, because not only is it a fun one to take on (hey, who doesn’t like watching lots of movies?), but it also gives you plenty to talk about with friends. 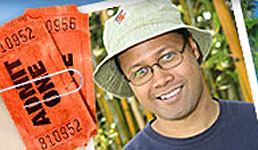 Fandango editor (and all-around righteous dude) Chuck Walton has decided to watch 100 films over the course of 100 days, taking in a screening of one film per day. Easy, you might say, though keep in mind that Chuck will only be watching these movies on the big screen – traveling throughout his home city of Los Angeles, as well as to different destinations across the country, in an attempt to not only document his feelings on each film, but also to let you know about his moviegoing experience at all these different theaters.
Honestly, it’s a job I’d take in a heartbeat, and while I could see Chuck getting tired at around day 60 or so, hopefully his love of movies will get him all the way through till the end. You can track Chuck’s progress over on our special 100 Days of Summer page. Right now Chuck is on Day 6, seeing Clash of the Titans at an AMC Loews in Marina Del Rey, CA, and I’ve been told that he’ll be traveling across the nation – from Anchorage, Alaska to Welsey Chapel, Florida – in order to share his cross-country moviegoing experiences with you.
So keep an eye on the page (we’ll certainly be doing that all summer long), and throw lots of good vibes his way. It’ll be a long journey for him, but definitely a fun one.
Like it? Share it: