'Coraline' Out to Scare Kids?

Is Henry Selick’s new stop-motion film Coraline too scary for kids? The 2-1/2 minute trailer starts all cute and fun, but ends up showing some pretty dark stuff – which the movie’s new TV spots calculatedly seem to be de-emphasizing. Neil Gaiman, who wrote the original children's book, says in his blog that it's for a parent to determine: "I think a good rule of thumb would be, that if your child can cope with The Nightmare Before Christmas and the original Wizard of Oz then they should be able to cope with Coraline just fine." 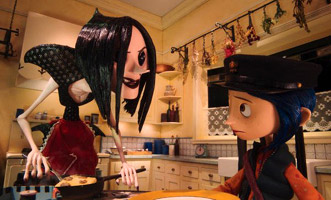 The film's style is definitely reminiscent of Selick's popular Nightmare Before Christmas, which didn't seem like it traumatized young ones with all the singing and dancing, but Coraline might attract a younger audience since Dakota Fanning voices the main character. Obviously, the stop-motion animation puts a barrier on reality, but there’s just something a tad creepier about replacing eyeballs with buttons.