Christina Aguilera to Sex It Up in Big-Screen Debut

I bet you woke up today wondering when Christina Aguilera would finally make the transition from pop star to movie star – am I right? Well good news for you Aguilera fans, because Variety tells us the smooth and sexy singer will make her big-screen debut in a contemporary movie-musical called Burlesque. In it, she’ll play a small-town girl with a big voice who moves to Los Angeles, works in a Cabaret-like Burlesque club and, in the process, finds love, family and all that good stuff. 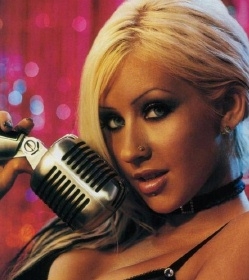 Steve Antin, who some of you old-schoolers may remember as Troy from The Goonies, will direct the film off his own script, which is currently being re-tooled by Susannah Grant (Erin Brockovich). Following the recent success they had with Obsessed (featuring another singer-turned-actress in Beyonce Knowles), Screen Gems hopes to do the same with Aguilera, who, surprisingly, has won four Grammies and yet never starred in a movie, save for voice work on Shark Tale.

What do you think about Christina Aguilera’s move to movies? Do you welcome it, or should the gal remain behind the microphone?