February 4th 2011, 3:14 pm
It’s a little quiet at the box office this weekend, and we think it has something to do with a little football game called the Super Bowl. As such, this weekend only gives us two new releases to devour, both of which look to cough up some thrills, chills and more reasons why it’s better to live alone. Let’s take a look … 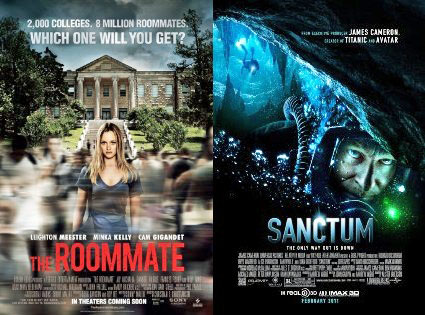 The Roommate
What’s The Scoop: Leighton Meester and Minka Kelly star in this film about a college girl (Kelly) finds her life in jeopardy after she takes on a new psycho roommate (Meester).
Why It Might Win The Weekend: The “psycho roommate” genre has been done before (remember Single White Female?), but it’s proven to be pretty successful and both Meester and Kelly are fairly popular names with the teen crowd.
Sanctum
What’s The Scoop: Based on a true story, James Cameron produced this thriller about a cave-diving expedition that goes horribly wrong.
Why It Might Win The Weekend: Knowing it’s produced by James Cameron and in 3D may help it bring in those folks looking for another Avatar-like experience. The R-rating may ultimately hurt its final numbers, though.
My Prediction: I’m truly up in the air on this one folks, but considering the young hot talent in The Roommate, I’m going to go with that for the win.

Now it’s your turn – which film do you think will win the weekend box office?