While rumors continue to swirl around other comic book and fanboy-centric movies, the Avengers sequel has gone ahead and added another supervillain.

Thomas Kretschmann has signed on to play Baron Wolfgang von Strucker in the film. Fans might recognize Kretschmann from NBC's Dracula, where he plays Abraham van Helsing. 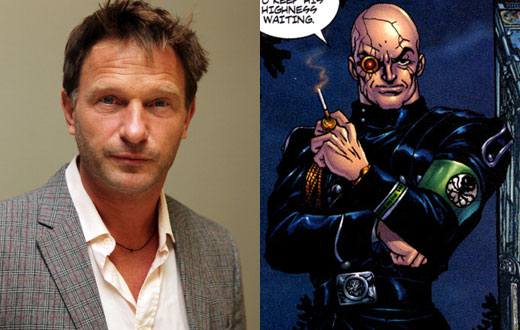 Baron Strucker is a former Nazi officer and one of the leaders of HYDRA. He's a character of high intellect and peak physical condition. An exceptional swordsman, marksman and hand-to-hand combatant, Strucker is also a supreme military strategist.

Kretschmann joins James Spader, who will be playing the titular villain, Ultron. It remains to be seen how writer-director Joss Whedon will use two other new characters, Quicksilver and Scarlet Witch. Quicksilver is also appearing in Bryan Singer's X-Men: Days of Future Past and by the looks of a recent promo still, he looks to be an X-Men ally.

How do you think the Baron will fit into Whedon's overall Avengers: Age of Ultron story? Do you think we'll be getting clues to the Baron in this April's Captain America: The Winter Soldier?