They finally did it. Those maniacs at The Alamo Drafthouse put together and hosted a marathon of all five of the original Planet of the Apes films. I am an enormous fan of this franchise. When I was a kid, I was introduced to the Apes universe by my father, and it has informed a great deal of my sci-fi appreciation from that point forward. That being said, I had only ever seen one of the films on the big screen in 35mm. My excitement for this event could not have been measured.

The prints obtained for this marathon were from the studio itself and were beyond gorgeous. The events were presided over by the Alamo's Zack Carlson in a disturbingly cute chimp costume as well as Badass Digest's Devin Faraci. The room was electric despite the early hour of the marathon's commencement. The auditorium was filled to the rafters with ape enthusiasts and those who were taking furious notes in the hopes of deterring the inevitable rise of our ape overlords. The menu featured specialty items catered to this historic occasion. There were spare ribs, special hot dogs, and banana fritters…all of which were absolutely delicious.
It was interesting to note the amount of people in the theater who had never seen any of the films and how flabbergasted they must have been after seeing the second movie to know that three more films remained. It got me wondering about the timeline of the events in the various films versus their order of release. It can be a bit overwhelming. Therefore, I have arranged my breakdown of these films in order of how they progress the unified timeline of the series.

Escape from the Planet of the Apes (1971)
Sequentially the third film in the franchise, Escape from the Planet of the Apes takes place on Earth not long after both Colonel Taylor's and Brent's expeditions have been launched. When one of the spaceships crash lands back in Pacific Ocean, the world is shocked to learn it was piloted by three apes; the shock intensifying when it is found the apes can speak. The ape crew is comprised of two familiar simian faces, Cornelius and Zira, and a Dr. Milo who is unfortunately killed by a gorilla at the zoo. Irony? Vaguely. The remaining two apes end up accepted and beloved by the worldwide community who are then even more enraptured by them when it turns out Zira is pregnant.
As much as I do not count Escape from the Planet of the Apes among my favorites of the franchise, one thing that is noteworthy is how brutally inexplicable its G rating remains. This is a movie that ends with the gunning down of a baby ape still in swaddling clothes along with its parents. So yeah, parents in the early 70s, good luck with the conversations on that ride home. It is also interestingly the film most ensconsed in the decade in which it was made. The fashions, the interior decorating, and the smooth jazz, carefree montages shrilly scream 1970s.
Much like the Terminator mythology, the constantly revisited time travel story elements of the Planet of the Apes makes for a cyclical chronology. The events of the first film end up explained by events that take place in the subsequent films. So like the fact that John Connor inadvertently ensures his own birth by sending Kyle Reese back in time to protect his mother, the events that will culminate in a society wherein apes evolve from, and soundly dominate, men are sparked by the arrival of beings from that already established, upside-down society. If you think about it too deeply, I promise your eyes will never uncross. This effectively makes the third film in the series the first on the Planet of the Apes continuum.

Conquest of the Planet of the Apes (1972)
By far my favorite of the franchise, Conquest of the Planet of the Apes tells the story of Caesar, the come-to-find-out not dead offspring of Cornelius and Zira. Living in a time when apes have evolved just enough intelligence to allow their accomplishment of very menial tasks, Caesar is the only ape gifted with the ability to speak. He becomes increasingly incensed seeing his kind under the oppressive yoke of slavery and ends up leading a massive revolution against the humans. Conquest is the first of two Apes films directed by J. Lee Thompson, one of my favorite b-movie directors.
While many of the previous films had worn their playful political subtext on their sleeves, Conquest rips that sleeve off, wraps it around your throat, and strangles you until you subscribe to its ideology. This film is a fiery, seething parallel to the tumultuous racial inequality existing in America in the late 60s/early 70s. Roddy McDowall, playing his previous iconic character's son, sheds much of his cutesy amiability and plays Caesar with dark, brooding angst and malevolent rage. The event's co-sponsor, Devin Faraci mentioned that the scenes of the ape revolt near the end were modeled after footage of the Watts Riots; a racially-charged, six-day riot in Los Angeles. The director's cut, which can be found on the Blu-ray release, features scenes deleted that would have easily netted the film an R rating and really put a fine, bloody point on the film's blistering supertext.
On the timeline of the franchise, Conquest of the Planet of the Apes is the turning point. It takes place twenty years after the events of the third film and represents the beginning of man's downfall. Though the fact that apes have evolved in size and intelligence and that all cats and dogs have gone extinct in a two-decade span is no small logical leap, Caesar sets in motion a series of events that will forever alter the assignment of Earth's dominant species.

Battle for the Planet of the Apes (1973)
A decade after establishing freedom and independence for his ape brethren, and actually establishing them as the dominant species on the planet, Caesar is working to rebuild society. In the aftermath of his riots, mankind retaliated with the only contingency it could come up with: all out nuclear war. Caesar hopes that humans and apes can coexist peacefully, but the leader of his gorilla army, General Aldo, sees humans as a pestilence and a race that should forever be subjected to apes.
I enjoy Battle for the Planet of the Apes on a purely b-movie level. It has flashes of, read slightly rips off, The Road Warrior and its titular battle does live up to the inherent expectations. Paul Williams, co-star of the Smokey and the Bandit movies and popular songwriter, is a fantastic addition as orangutan Virgil who actually tries to contemplate the theories of time travel that are at the center of this entire franchise. But the ultimate lack of change in the overall narrative from the beginning to the end of the film makes the plot seem so compartmentalized as to appear as a television series entry.
The biggest disappointment of the final film in the series is that it completely fails to bridge its own events to the realities of the very first film. Therefore, the circle is left broken and a massive amount of inference must be employed to fill in the gaps. However, it should be noted that Battle is bookended by segments wherein the Lawgiver, a figure mentioned many times with holy reverence in the first film, is recounting the story of Caesar's triumph over Aldo and those bookends are said to take place around 1200 years prior to the date of Planet of the Apes. Since Dr. Zaius mentions that the ancient scrolls were written 1200 prior to the events of Planet of the Apes and since it is established that the orangutans of the original film are unethical clergymen who bend and hide the truth to keep their society stagnant, the vagueness of the connection between the fifth film and the first are more easily understood. 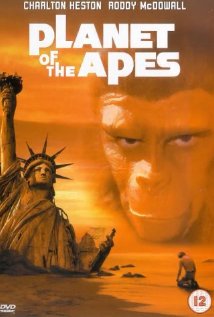 Planet of the Apes (1968)
The original, the classic, and a film I never tire of watching. There is very little I need say about this film. Every time I watch Planet of the Apes, I imagine myself sitting in a theater in 1968 and listening to the reaction of the audience as the camera slowly pans across the beach to reveal the rusted remnants of the Statue of Liberty and the realization sets in that it was Earth all along.
So now we've doubled back on ourselves and reached the zenith of the third through fifth films. Few franchises expand and enhance their own mythology by constructing an elaborate circular plot structure that ends up following its own rabbit hole back to the original film.

Beneath the Planet of the Apes (1970)
As if the shock of finding out that the planet of the apes was in fact Earth weren't enough, Col. Taylor then manages to somehow fall into a mountain and vanish. Luckily, John Brent, astronaut and Charlton Heston lookalike, has been sent to determine the fate of Col. Taylor and his crew. He gets himself similarly stranded and follows his trail back to the ape city. Here he finds out that the gorillas are planning to invade the forbidden zone because they suspect there is life, and an unnamed threat, residing there. Brent then makes his way through an underground cave system that turns out to be the remains of New York City. What he finds there is not only Col. Taylor, but also a race of post-apocalyptic mutant humans who worship an atomic bomb. Hooray!
This is truly the most bizarre film of the series. We get imaginary walls of fire, mutants with removable faces, telekinetic weapons, and two heroes who look exactly the same. Apparently Charlton Heston had very specific demands for his return to the franchise, not the least of which being that his scenes had to be completed within two weeks; explaining his absence for much of the film. The film endears itself to me largely on its weirdness alone. There are however two drawbacks. The first is that it is the only film to not feature Roddy McDowall in the role of Cornelius; he had to be replaced due to a scheduling conflict. The other is that the makeup budget was clearly diminished, as many of the apes in the crowd scene seem perpetually surprised due to their less-articulate masks.
This is not only the finale fo the franchise according to its own chronolgy, but also the end of the world as we know it... or don't yet know it I suppose. The story of our planet/the planet of the aper ends with a bang as Taylor sets off the revered atom bomb. But, given the cycling of the plot, it also represents the catalyst that kick starts the timeline all over again.
Like it? Share it:

Orlando Bloom Confirmed For ‘The Hobbit’

Orlando Bloom Confirmed For ‘The Hobbit’