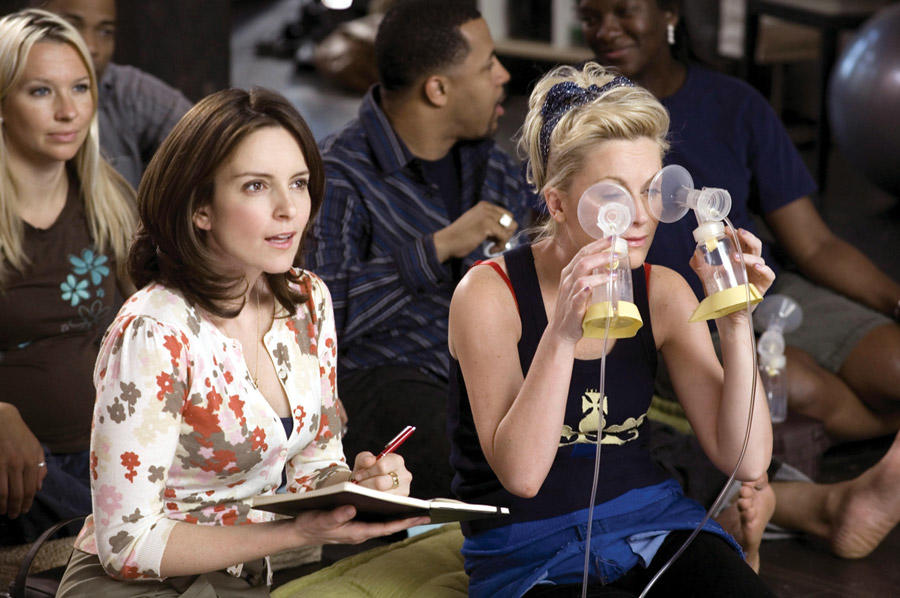 8 Times Tina Fey and Amy Poehler Were the Best BFFs

They play clashing siblings in the new comedy Sisters, but BFFs Tina Fey and Amy Poehler have rocked that sisterhood vibe for years now. From Saturday Night Live to awards shows to the big screen, these sassy stars are as close and as crazy as any real sibs could ever be. Page through their family album with these classic clips.

In 2008’s Baby Mama, cultures clash when Fey’s businesslike Kate hires slacker Angie (Poehler) to carry her baby. Everything from birthing class to baby-proofed toilets flummoxes Angie, but perhaps the funniest scene is where Fey prods her to gulp down a prenatal vitamin that’s the size of a small manhole cover. “Angie, CATS can do this!” Fey scolds. Next time, hide the pill in some Fancy Feast.

Here’s the dynamic duo’s most famous bit ever. It’s Fey as Alaska governor Sarah Palin that everyone remembers, but don’t overlook Poehler’s spot-on performance as an exasperated Hillary Clinton. (“I was told I’d be addressing you alone,” she tells viewers.) Witness the birth of the line so famous many people still think Palin actually said it -- “I can see Russia from my house!”  If only real politics were this much fun.

Tina and Amy heckle Neil Patrick Harris at the 2013 Emmys

In the best moment from the 2013 Emmys, Fey and Poehler kick back and chomp popcorn while they hoot at host Neil Patrick Harris from their seats. Only these two could call for pantsless twerking with so much style. Don’t miss Poehler bringing down the house with her sly, over-the-glasses comeback when Harris declines.

This skit gets less attention than the Palin-Clinton clash, but it’s every bit as funny, with a pregnant Poehler using perfectly timed blinks and pauses to let Fey’s merry babble roll over her like a not-very-bright brook. And yes, Fey’s Palin takes another shot at that Russia question. It goes about as well as you would expect.

Fey and Poehler grabbed SNL’s Weekend Update anchor desk in 2004, giving the fake newscast its first two-woman team. Right away, they showed their mettle, delivering life advice to their Mean Girls costar Lohan, who ends up turning the tables on the two. (Bonus points for Fey’s sly Fandango mention!)

True confessions on The Tonight Show with Jimmy Fallon, 2015

Fey and Poehler join fellow Weekend Update vet Jimmy Fallon in a rollicking contest to determine if random personal facts are true or false. Was Tina mistaken for a Monaco prostitute? Was college-age Jimmy robbed with a sawed-off shotgun? How was a polka-dot jumpsuit involved? It’s like spying on three hilarious college friends as they try to one-up each other.

In a delightful three-minute interview, Poehler quizzes her pal about her preferences in everything from rappers to school reunions. Fey’s improv skills are on full display, Poehler cheerfully barges right along, and you wish the three minutes were three hours.

Got a favorite moment we didn't mention? Let us know.

'Star Wars' Weekly Poll: Which Quote Do You Use In Everyday Life?

'Star Wars' Weekly Poll: Which Quote Do You Use In Everyday Life?