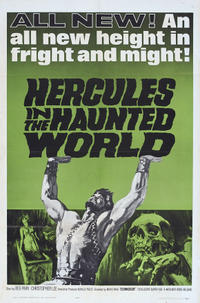 Hercules in the Haunted World / Duel of the Titans

HERCULES IN THE HAUNTED WORLD (ERCOLE AL CENTRO DELLA TERRA), 1961, 86 min. Dir. Mario Bava. Strongman Hercules (Reg Park) descends into a phantasmagorical underworld in search of a stone that will restore his beloved’s memory. With Christopher Lee as evil Lycos, the smooth-talking, bloodthirsty necromancer out to destroy the legendary hero. DUEL OF THE TITANS, 1961, Paramount, 89 min. “The Legendary Conflict of Mankind's Mightiest Mortals!” Director Sergio Corbucci (THE GREAT SILENCE, DJANGO) tackles the myth of Romulus (Steve Reeves) and Remus (Gordon Scott), the two rebel brothers said to have been suckled by wolves at birth, who went on to found the ancient city of Rome. Reeves had already garnered fame as Hercules, and Scott was a veteran of some of the best post-Johnny Weismuller Tarzan films; it was a perfect pairing for this tale of the legendary rival siblings who lead their people out of bondage to a more enlightened future. Co-starring Virna Lisi.