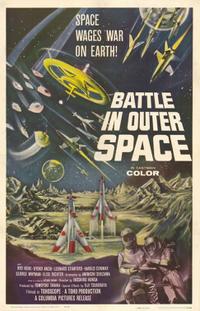 GODZILLA, MOTHRA & KING GHIDORAH: GIANT MONSTERS ALL-OUT ATTACK, 2001, Sony Repertory, 105 min. Acclaimed by fans as one of the most exciting Godzilla films since the heyday of the 1960’s, "GMK" features a terrific, redesigned Big G, bent on destroying Japan as vengeance for the restless souls of WWII victims. Standing in his way are the "Guardian Deities" – i.e. Mothra, King Ghidorah and Baragon. In Japanese with English subtitles. BATTLE IN OUTER SPACE, 1959, Sony Repertory, 90 min. Dir. Ishiro Honda. Nations of the world unite against a massive alien force, doing spaceship and raygun battle in space and on the moon to thwart the invaders' onslaught.