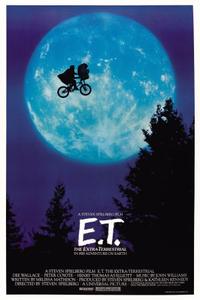 E.T. THE EXTRA-TERRESTRIAL, 1982, Universal, 120 min. Arguably director Steven Spielberg’s most popular film, it follows several children (including Henry Thomas and a very young Drew Barrymore) who shelter and try to help a stranded alien back home to the stars. With Dee Wallace Stone, Peter Coyote. CLOSE ENCOUNTERS OF THE THIRD KIND, 1977, Columbia, 135 min. Director Steven Spielberg’s thrilling, suspenseful and somehow very "human" speculation on the possibility of alien contact with mankind was one of the most surprising blockbusters of the 1970s. Richard Dreyfuss does a terrific job of anchoring the film as an unhappily married Everyman who’s suddenly possessed – along with hundreds of others – with visions of a strange tower rising up. With Francois Truffaut, Teri Garr, Melinda Dillon, Bob Balaban.