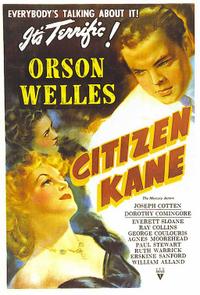 CITIZEN KANE, 1941, Warner Bros., 119 min. Orson Welles was only 25 when he directed this masterpiece, and it remains one of the most phenomenal motion pictures ever made. Welles, of course, also stars as Charles Foster Kane, a ruthless man who built a newspaper publishing empire and a character supposedly modeled after the real-life William Randolph Hearst. STAGECOACH, 1939, 96 min. Dir. John Ford. A stagecoach full of involving characters, superbly drawn and played, travels through dangerous Indian territory. After a decade in movies, John Wayne became a star once and for all as the Ringo Kid, gallantly defending vulnerable shady lady Claire Trevor, while Thomas Mitchell's drunken doctor won him an Oscar. This landmark Western was the film Orson Welles watched repeatedly to prepare for his debut feature, CITIZEN KANE.