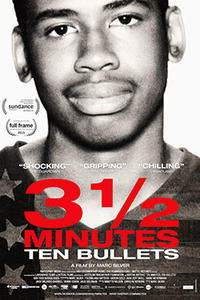 On Black Friday 2012, four African-American teenagers stopped at a gas station to buy gum and cigarettes. One of them, Jordan Davis, argued with Michael Dunn, a white man parked beside them, over the volume of music playing in their car. The altercation turned to tragedy when Dunn fired 10 bullets at the unarmed boys, killing Davis almost instantly. The seamlessly constructed, riveting documentary film 3 1/2 MINUTES, TEN BULLETS explores the danger and subjectivity of Florida's Stand Your Ground self-defense laws by weaving Dunn's trial with a chorus of citizen and pundit opinions, and with Jordan Davis' parents' wrenching experiences in and out of the courtroom. As conversations about Trayvon Martin, Michael Brown, Walter Scott, Freddy Gray, and other victims of senseless violence play out on the national stage, 3 1/2 MINUTES, TEN BULLETS dives deep into the aftermath of Jordan Davis’ murder.