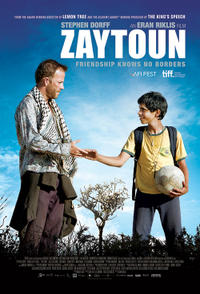 Looking for movie tickets? Enter your location to see which movie theaters are playing Zaytoun near you.

In 1982, amid the Lebanese Civil War, Israeli pilot Yoni (Stephen Dorff) is shot down over Beirut and is taken prisoner by inhabitants of a Palestinian refugee camp. Among the captors is ten-year-old Fahed, whose father obsessively tends to his prized, but sickly olive tree, refusing to replant it until they return to their ancestral land. Despite his deep-rooted hatred for Yoni, Fahed realizes he can use him to get past the border and into “Palestine” to plant his father’s olive tree. The two embark on a harrowing and dangerous journey – one that tests the very boundaries of humanity. ZAYTOUN is a story of survival, reconciliation and friendship.