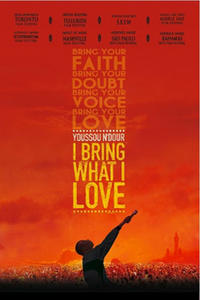 Looking for movie tickets? Enter your location to see which movie theaters are playing Youssou N'Dour: I Bring What I Love near you.

'I Bring What I Love: Youssou Ndour,' is an award-winning music-infused cinematic journey about the power of one man’s voice to inspire change. Ndour is the highest selling African artist of all time and has collaborated with musical superstars like Bono, Neneh Cherry and Peter Gabriel. At home in Senegal, the Grammy-award winning artist is an inspiration for generations. The film chronicles Ndour, a devout Sufi Muslim, as he releases a deeply personal and religious album called Egypt in the hope of promoting a more tolerant face of Islam. Almost instantly, his fellow Senegalese reject the album, and denounce his actions as blasphemous. Director Chai Vasarhelyi follows Ndour for over two years – filming in Africa, Europe, and America – to tell the story of how he faces these challenges and eventually wins over audiences both at home and abroad.