WHY DON'T YOU PLAY IN HELL Synopsis Favorite Theater Button 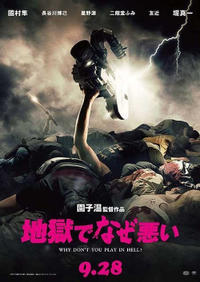 Looking for movie tickets? Enter your location to see which movie theaters are playing WHY DON'T YOU PLAY IN HELL near you.

Los Angeles Premiere! WHY DON’T YOU PLAY IN HELL? (JIGOKU DE NAZE WARUI), 2013, Drafthouse Films, 126 min. Dir. Sion Sono. Winner of the Toronto International Film Festival’s People's Choice Midnight Madness Award! A violent confrontation with a rival yakuza clan leaves a mob boss's wife in prison and his daughter’s performing career derailed. Some down-on-their-luck moviemakers may be able to give the aspiring actress a boost - but they are walking into a bloodbath. In Japanese with English subtitles. Hosted by David Choe, who will produce his DVDASA podcast on-site from 7:30-8:00 PM.