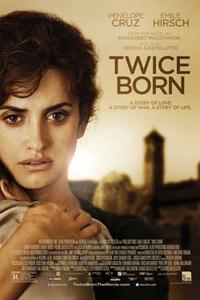 Looking for movie tickets? Enter your location to see which movie theaters are playing Twice Born near you.

Gemma (Penelope Cruz) returns Sarajevo with her son, Pietro, after escaping the war-torn city sixteen years earlier. Diego (Emile Hirsch), Pietro's father, remained behind and later died in the Bosnian conflict. As Gemma tries to repair her difficult relationship with Pietro, she also confronts her past. Gemma first met and fell in love with Diego in Sarajevo. They desperately wanted children but she could not conceive. Amidst the siege of 1992, they found a possible surrogate and Gemma pushed her into Diego's arms, only to be overwhelmed by guilt and jealousy. Now, a revelation awaits Gemma - one that will force her to face the full extent of her loss, the true horror of war and the redemptive power of love.