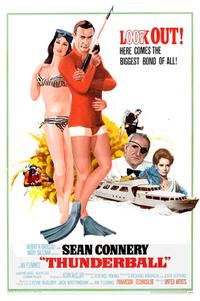 Looking for movie tickets? Enter your location to see which movie theaters are playing THUNDERBALL/THE UNTOUCHABLES near you.

THUNDERBALL, 1965, Park Circus/MGM, 130 min. Dir. Terence Young. James Bond’s therapeutic rest cure is cut short when a British bomber with two A-bombs aboard is hijacked by SPECTRE and secreted below the waters of the Caribbean. THE UNTOUCHABLES, 1987, Paramount, 119 min. Director Brian De Palma and screenwriter David Mamet turn the raw material of 1960s television and American crime history into the stuff of glorious cinematic mythology in this gangster epic. Kevin Costner is treasury agent Eliot Ness, Robert De Niro is his nemesis, Al Capone, and Sean Connery is the grizzled cop who does things “the Chicago way.”