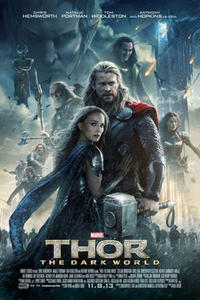 Looking for movie tickets? Enter your location to see which movie theaters are playing Thor: The Dark World Marathon near you.

Don't miss your only chance to see both Thor and Thor: The Dark World on the big screen.<br /> At the center of the story is The Mighty Thor, a powerful but arrogant warrior whose reckless actions reignite an ancient war. Thor is cast down to Earth and forced to live among humans as punishment. Once here, Thor learns what it takes to be a true hero when the most dangerous villain of his world sends the darkest forces of Asgard to invade Earth.<br /> Thor: The Dark World continues the big-screen adventures of Thor as he battles to save Earth and all the Nine Realms from a shadowy enemy that predates the universe itself. An ancient race led by the vengeful Malekith returns to plunge the universe back into darkness. Faced with an enemy that even Odin and Asgard cannot withstand, Thor must embark on his most perilous and personal journey yet, one that will reunite him with Jane Foster and force him to sacrifice everything to save us all.