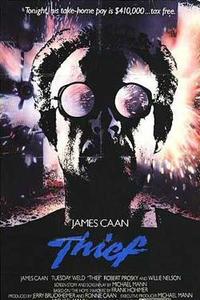 Looking for movie tickets? Enter your location to see which movie theaters are playing Thief / American Gigolo near you.

Double Feature: THIEF, 1981, Park Circus/MGM, 122 min. Director Michael Mann's stunning debut feature stars James Caan as the professional thief of the title, a man whose desire for domestic tranquility clashes with his obligations in the underworld. Featuring standout supporting performances from Jim Belushi, Willie Nelson and Robert Prosky. Actual thieves served as technical consultants on the film. AMERICAN GIGOLO, 1980, Paramount, 117 min. Julian Kaye (Richard Gere) is a suave, Armani-clad prostitute embroiled in a steamy affair with a senator’s wife (Lauren Hutton) when he becomes the prime suspect in the murder of one of his previous clients. Helmed by RAGING BULL scribe Paul Schrader, this stylish, ’80s-chic crime drama is driven by Gere’s layered portrait of the vulnerable, hopelessly empty playboy.