The Thing About My Folks Synopsis Favorite Movie Button 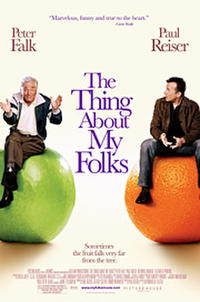 Looking for movie tickets? Enter your location to see which movie theaters are playing The Thing About My Folks near you.

Ben Kleinman (Paul Reiser) knows that his mother wrote a farewell to Sam Kleinman (Peter Falk) once before – a letter penned two weeks before his birth and never sent. When Ben, in a fit of anger, decides to show Sam the letter, he opens up a monumental can of worms – and a new chapter in his relationship with his father. Finding the past four decades of his life called into question, Sam responds in a surprisingly impulsive fashion: he buys the car of his college dreams and proposes a road trip to his incredulous son. Over the next several days and nights, Ben will have the trip with his dad that he’d always wanted as child. Through various idylls and misadventures in the small towns of upstate New York, Ben and Sam will chat, argue, get drunk, and generally get to know one another as never before.