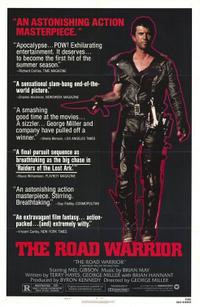 Looking for movie tickets? Enter your location to see which movie theaters are playing The Road Warrior / Lifeforce near you.

<p>THE ROAD WARRIOR,1981, Warner Bros., 94 min. Hockey mask-wearing Lord Humongous whips his speed-freaks into a frenzy, while Mad Max, the Road Warrior (Mel Gibson), tries to save the remnants of civilization in director George Miller’s lean, mean thrill machine – along with James Cameron’s ALIENS, the finest action film of the decade. And as in the case of ALIENS, this film sequel manages to be every bit as good -- if not better than -- the original.</p> <p>LIFEFORCE, 1985, Sony Repertory, 101 min. Sex-starved space vampire Mathilda May terrorizes the world while looking for something to wear, in director Tobe Hooper’s gleeful, over-the-top sci-fi flick – one of the great pulp movies of the 1980s. Steve Railsback co-stars as the lovestruck astronaut dazzled by May’s charms, with help from Peter Firth as a government agent and “Star Trek’s” Patrick Stewart as the head of an asylum.</p>