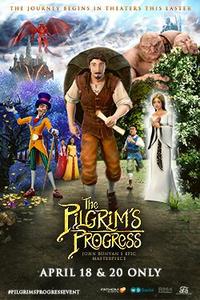 Looking for movie tickets? Enter your location to see which movie theaters are playing The Pilgrim's Progress near you.

This family-friendly animated feature follows closely John Bunyan’s masterpiece by the same title. The Pilgrim’s Progress comes to cinemas on Thursday, April 18 at 7:00 p.m. and Saturday, April 20 at 12:55 p.m. (local time both dates). A man named Pilgrim discovers a book, and the more he reads it, the more he is convicted of sin and judgement, and a burden begins to develop on his back. Obsessed with discovering the truth and escaping his town, the City of Destruction, he ventures outside the forbidden borders and begins his journey to find a Celestial City ruled by a good and noble King, meeting friend and foes along the way. In addition to the feature content, audiences will enjoy a special introduction message from Kristyn Getty on the importance of inspiring the imagination of children in building their faith.