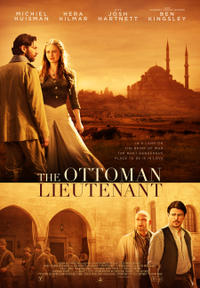 Looking for movie tickets? Enter your location to see which movie theaters are playing The Ottoman Lieutenant near you.

THE OTTOMAN LIEUTENANT is the first movie to explore the eastern front of World War I, and tells the story of a beautiful, strong-willed woman (Hera Hilmar, ANNA KARENINA, DAVINCI’S DEMONS), who, frustrated by ongoing injustice at home, leaves the United States after meeting Jude, an American doctor (Josh Hartnett, PENNY DREADFUL, BLACK HAWK DOWN, PEARL HARBOR ) who runs a remote medical mission within the Ottoman Empire — a world both exotic and dangerous, and on the brink of what is about to become the first World War. There, she finds her loyalty to Jude and the mission’s founder, (Ben Kingsley, GANDHI, SCHINDLER’S LIST) tested when she falls in love with a lieutenant in the Ottoman Imperial Army (Michiel Huisman, WILD, THE AGE OF ADALINE, HARLEY AND THE DAVIDSONS, GAME OF THRONES). Now, with invading army forces at their doorstep, and the world about to plunge into all-out war, she must decide if she wants to be what other people want her to be, or to be herself.