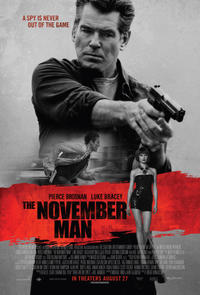 Looking for movie tickets? Enter your location to see which movie theaters are playing The November Man near you.

Code named ‘The November Man’, Peter Devereaux (Pierce Brosnan) is a lethal and highly trained ex-CIA agent, who has been enjoying a quiet life in Switzerland. When Devereaux is lured out of retirement for one last mission, he must protect valuable witness, Alice Fournier, (Olga Kurylenko). He soon uncovers this assignment marks him a target of his former friend and CIA protégé David Mason (Luke Bracey). With growing suspicions of a mole in the agency, there is no one Devereaux can trust, no rules and no holds barred. With a screenplay by Michael Finch & Karl Gajdusek based on Bill Granger’s novel “There are No Spies” from the bestselling November Man book series, THE NOVEMBER MAN is the ultimate cat and mouse game set in the world of international espionage. Directed by Roger Donaldson (The Bank Job, No Way Out, Thirteen Days), the film is produced by Beau St. Clair of Irish DreamTime and Sriram Das of Das Films.