The Night of the Generals Synopsis Favorite Movie Button 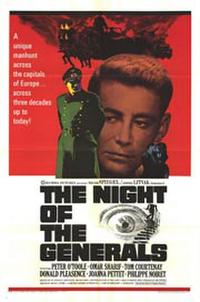 Looking for movie tickets? Enter your location to see which movie theaters are playing The Night of the Generals near you.

THE NIGHT OF THE GENERALS, 1967, Sony Repertory, 148 min. An epic murder mystery set during WWII. Peter O’Toole is the Nazi general who is a psychopath in the bedroom (he murders prostitutes) as well as on the battlefield. Omar Sharif is the colonel after him with the help of French police inspector Philippe Noiret. Corporal Tom Courtenay and Joanna Pettet are the innocent couple caught in the nightmare. And three other generals (Donald Pleasence, Charles Gray, Harry Andrews) are conspiring to assassinate Hitler. Anatole Litvak (SORRY, WRONG NUMBER) directed. Criminally underrated on its initial release.