The Nickel Ride / The Other Synopsis Favorite Movie Button 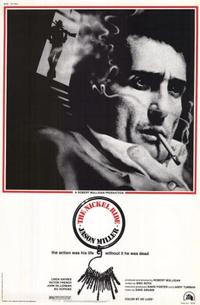 Looking for movie tickets? Enter your location to see which movie theaters are playing The Nickel Ride / The Other near you.

Rare Archival Double Feature! THE NICKEL RIDE, 1974, 20th Century Fox, 99 min. Dir. Robert Mulligan. Charged by his syndicate boss, urbane John Hillerman, with buying up an unused block of warehouses for more storage, Jason Miller starts to encounter problems. Like an unraveling ball of yarn, trivial difficulties snowball out of control, threatening not only his career but his life. Screenplay by Eric Roth (THE INSIDER, FORREST GUMP).<br /><br /> 40th Anniversary! THE OTHER, 1972, 20th Century Fox, 108 min. Dir. Robert Mulligan. Strange happenings begin to swirl around twins Niles and Holland Perry when their grandmother (Uta Hagen) teaches one of them to play “the great game” - a way to project the mind outside the body - which has grave consequences when it turns out the pair are much less angelic than they initially appear.