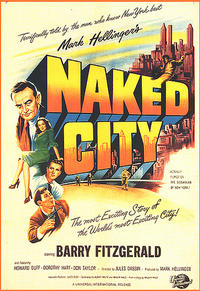 Looking for movie tickets? Enter your location to see which movie theaters are playing The Naked City / Never On Sunday near you.

<p>THE NAKED CITY, 1948, Mark Hellinger Productions, 96 min. Dir. Jules Dassin. The scrupulously researched script by Malvin Wald and vivid location photography by William Daniels (an Oscar winner) combined to make this one of the most influential Hollywood films of the 1940s. With Barry Fitzgerald, Howard Duff, Don Taylor, Dorothy Hart and a very scary Ted de Corsia.</p> <p>NEVER ON SUNDAY, 1960, MGM Repertory, 97 min. Dir. Jules Dassin. The formerly blacklisted expatriate also wrote, produced and starred as Homer Thrace, the philosophizing Connecticut. Yankee who finds himself in the court of the Greek siren, the ancients here embodied in the shapely form of prostitute Ilya, played by Melina Mercouri. Her vivacious performance as a headstrong Galatea who remains undaunted by the local males won her Best Actress at Cannes. She and Dassin would later marry.</p>