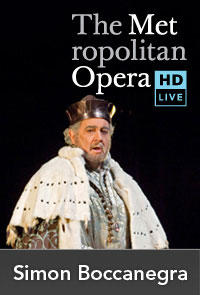 Looking for movie tickets? Enter your location to see which movie theaters are playing The Metropolitan Opera: Simon Boccanegra Encore near you.

NCM Fathom presents an encore presentation of Verdi’s Simon Boccanegra in select theatres nationwide. The encore presentation (captured live on February 6, 2010) will be shown for one day only on Wednesday, February 24, 2010 at 6:30 PM in all time zones. Four decades into a legendary Met career, tenor Plácido Domingo makes history singing the title role in Verdi’s gripping political thriller, which is written for a baritone. James Levine conducts.