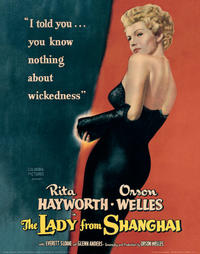 Looking for movie tickets? Enter your location to see which movie theaters are playing The Lady From Shanghi / Confidential Report near you.

THE LADY FROM SHANGHAI, 1948, Sony Repertory, 87 min. The camera is the star in one of director Orson Welles’ most phantasmagorical films, a dazzling noir thriller about a seaman, a crippled lawyer and his homicidal wife pursuing each other through a "bright, guilty world" of infidelity, deception and murder. The hall-of-mirrors climax is riveting. With Orson Welles, Rita Hayworth and Everett Sloane. <br /><br /> MR. ARKADIN (aka CONFIDENTIAL REPORT), 1955, Janus Films, 99 min. Dir. Orson Welles. A ruthless financier (Welles) hires a sleazy young cigarette smuggler to write a "confidential report" on his past, hoping to erase the last traces of his infamy so that his beloved daughter will never find the truth about him. Welles decks out this mock-tragic "chronicle of a death foretold" with down-and-dirty rococo effects and tall tales, including that epitome of cynicism, the fable about the frog and the scorpion.