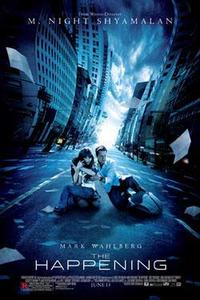 Looking for movie tickets? Enter your location to see which movie theaters are playing The Happening near you.

It begins with no clear warning. In a matter of minutes, episodes of strange, chilling deaths erupt in major American cities. For Philadelphia high school science teacher Elliot Moore (Mark Wahlberg) what matters most is finding a way to escape the mysterious and deadly phenomenon. Though he and his wife Alma (Zooey Deschanel) are in the midst of a marital crisis, they hit the road, first by train, then by car, with Elliot's math teacher friend Julian (John Leguizamo) and his 8 year-old daughter Jess (Ashlyn Sanchez), heading for the Pennsylvania farmlands where they hope they'll be out of reach of the grisly, ever-growing attacks. Yet it soon becomes clear that no one - and nowhere - is safe. This terrifying, invisible killer cannot be outrun. It is only when Elliot begins to discover the true nature of what is lurking out there that he discovers a sliver of hope that his fragile family might be able to escape what is happening.