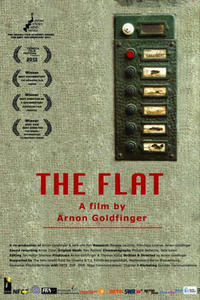 Looking for movie tickets? Enter your location to see which movie theaters are playing The Flat near you.

At age 98, filmmaker Goldfinger's grandmother passed away, leaving him the task of clearing out the Tel Aviv flat that she and her husband shared for decades since immigrating from Nazi Germany in the 1930s. Sifting through a dense mountain of photos, letters, files, and objects, Goldfinger begins to uncover clues that seem to point to a greater mystery and soon a complicated family history unfolds before his camera. What starts to take shape reflects nothing less than the troubled and taboo story of three generations of Germans – both Jewish and non-Jewish – trying to piece together the puzzle of their lives in the aftermath of the terrible events of World War II.<br /> <strong>Note:</strong> In Hebrew, English and German with English subtitles.