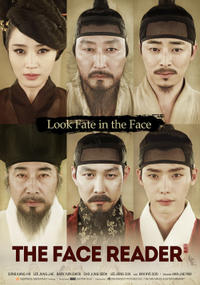 Looking for movie tickets? Enter your location to see which movie theaters are playing The Face Reader near you.

Nae-kyeong is the greatest face reader Joseon has ever known. He can see through people by looking at their faces. He lives with his son Jin-hyeong and his brother-in-law Paeng-heon in the mountains. After alluring courtesan Yeon-hong proposes an offer, he moves to Hanyang to read faces in the courtesan house. Nae-kyeong quickly becomes the “go-to face reader” in town and even Vice Premier KIM Jong-seo hears about the new face reader. He appoints Nae-kyeong to government’s Inspection Board. During his inspection, Nae-kyeong finds out about Prince Su-yang’s plan to take the throne of his nephew. He decides to change the destiny of the country by changing what’s written on Su-yang’s face.<b>Korean with English subtitles</b>