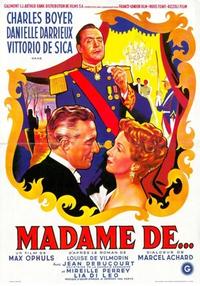 Looking for movie tickets? Enter your location to see which movie theaters are playing The Earrings of Madame De.../Le Plaisir near you.

Double Feature: THE EARRINGS OF MADAME DE…, 1953, Janus Films, 105 min. "Director Max Ophuls' THE EARRINGS OF MADAME DE... is a romantic tragedy at its most sublime, in which the beautiful wife (Danielle Darrieux) of a rich, titled general (Charles Boyer) falls in love with a handsome, equally aristocratic Italian diplomat (Vittorio De Sica) amidst the most opulent Belle Epoque settings." – Kevin Thomas. In French with English subtitles.<br /> LE PLAISIR, 1952, Janus Films, 97 min. Max Ophuls brings his opulent, dazzling style to this triptych of tales by Guy de Maupassant about the ironies, compromises and pleasures of the human condition. With an all-star French cast including Jean Gabin, Simone Simon and Danielle Darrieux. Stanley Kubrick once named it as his favorite film. In French with English subtitles.