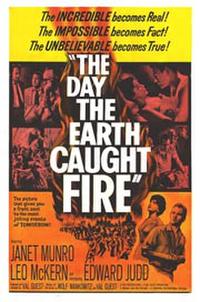 Looking for movie tickets? Enter your location to see which movie theaters are playing The Day the Earth Caught Fire / Last Man on Earth near you.

<br> THE DAY THE EARTH CAUGHT FIRE, 1961, Canal +, 99 min. Dir. Val Guest. One of the most gripping sci-fi films of the 1960’s, this is a chilling warning of ecological disaster. The U.S. and Russia set off simultaneous H-bombs at opposite poles, resulting in the Earth tottering off its axis to head for the sun. Edward Judd is an alcoholic journalist who finds last-minute redemption through the love of Janet Munro and the salty advice of fellow reporter Leo McKern. <br><br> LAST MAN ON EARTH , 1964, MGM Repertory, 86 min. Dir. Sidney Salkow (co-dir. Ubaldo Ragona, uncredited). Terrifying, vastly underrated adaptation of Richard Matheson’s landmark sci-fi horror novel, I Am Legend (shot in Italy), with Vincent Price as the lone survivor of a vampire plague that has left the population a nocturnal undead race.