THE BRIDGE ON THE RIVER KWAI/DAMN THE DEFIANT! Synopsis Favorite Theater Button 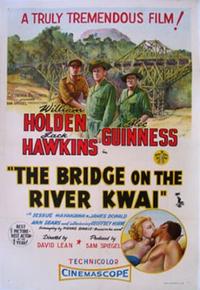 Looking for movie tickets? Enter your location to see which movie theaters are playing THE BRIDGE ON THE RIVER KWAI/DAMN THE DEFIANT! near you.

THE BRIDGE ON THE RIVER KWAI, 1957, Sony Repertory, 161 min. David Lean won the first of two Academy Awards for Best Director for this epic portrait of the clash of wills between a British POW (Alec Guinness, also an Oscar winner), and a tradition-bound Japanese officer (Sessue Hayakawa) over the building of a railway bridge in the jungle during WWII. With William Holden. DAMN THE DEFIANT! (aka H.M.S. DEFIANT), 1962, Sony Repertory, 101 min. Dir. Lewis Gilbert. Alec Guinness plays Captain Crawford, the commander of a British warship who clashes with his sadistic first officer - a deliciously evil Dirk Bogarde. When tensions between the men - and their subordinates - lead to mutiny, Crawford is forced to choose between duty and ethics in an effort to restore justice.