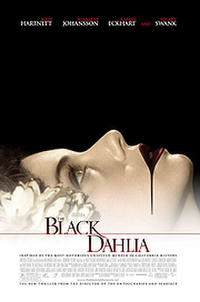 Looking for movie tickets? Enter your location to see which movie theaters are playing The Black Dahlia near you.

Two cops in 1940s Los Angeles investigate the shocking murder of a Hollywood starlet. One, Lee Blanchard (Aaron Eckhart), puts his marriage in jeopardy by obsessing over the crime, while the other, Bucky Bleichert (Josh Hartnett), becomes involved with a woman (Hilary Swank) from a prominent family, who happens to have an unsavory tie to the victim. Based on the novel by James Ellroy.