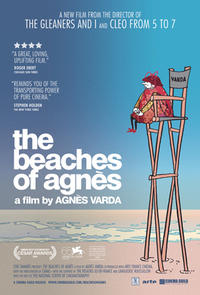 Looking for movie tickets? Enter your location to see which movie theaters are playing The Beaches of Agnès near you.

Varda’s latest work is an autobiographical essay that takes a nostalgic yet penetrating look back at her life and films. Using photographs, recreations and scenes from her films, Varda illustrates the various stages of her life, from her marriage to Jacques Demy and his death in 1990 to her childhood memories of Sète, the fishing village that would become the subject of her first film. Woven through these reminiscences are lonely, dreamlike sequences shot on the beaches that have influenced and inspired her. Plus US Premiere! "Gwen From Brittany," a short portrait of the encounters over the last decade of Agnès Varda and Gwen Deglise, programmer at the American Cinematheque, shot at the Aero and Egyptian Theatres while Varda was in Los Angeles shooting THE BEACHES OF AGNÈS.