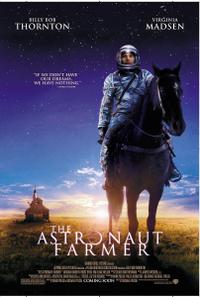 Looking for movie tickets? Enter your location to see which movie theaters are playing The Astronaut Farmer near you.

Dismissed from NASA’s space program, former astronaut-in-training Charles Farmer (Billy Bob Thornton) pursues his lifelong dream by building his own rocket. On the eve of his launch, Farmer must battle foreclosure on his ranch and a small-town community of disbelievers, while simultaneously drawing heavy scrutiny and surveillance from the FBI, CIA and the U.S. military, all of which see him as a potential risk to civilian safety and will take the necessary steps to shut down his operation. But he remains determined to reach his goal and instill in his children the courage to pursue their own dreams, no matter the odds.