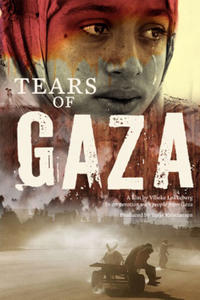 Looking for movie tickets? Enter your location to see which movie theaters are playing Tears of Gaza near you.

Disturbing, powerful and emotionally devastating, TEARS OF GAZA is less a conventional documentary than a record – presented with minimal gloss – of the 2008 to 2009 bombing of Gaza by the Israeli military. Photographed by several Palestinian cameramen both during and after the offensive, this powerful film by director Vibeke Løkkeberg focuses on the impact of the attacks on the civilian population. The film shuttles between the actual bombings and the aftermath on the streets and in the hospitals. The footage of the bombs landing is indelible and horrifying, but it is on par with much of the explicit imagery on hand. White phosphorous bombs rain over families and children, leaving bodies too charred to be identified. The footage here is extremely graphic and includes children’s bodies being pulled from ruins. Recounting the horrors she has witnessed, one young girl collapses and sinks out of the frame.