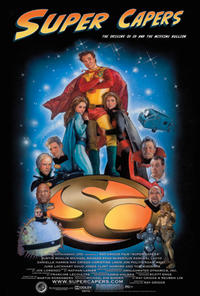 Looking for movie tickets? Enter your location to see which movie theaters are playing Super Capers near you.

<p>Ed Gruberman is a Los Angeles slacker barely scraping by posing for tourist photos in a superhero cape and tights. He's also a lifelong fan of the Dark Winged Vespers, a masked television superhero who defends the defenseless. Late one night, while still in costume, Ed stumbles upon a mugging in progress in a dark alley. He manages to fight off the armed thug only to learn that the intended victim, an alluring vixen in red leatherette, is a real life super villain. When she disappears before the police arrive, Ed is convicted of "superhero brutality" and sentenced to Super Capers, a halfway house for superheroes in training.</p><p><em>Super Capers</em> is an instant cult-classic that pays tribute to the freewheeling TV superhero series and science fiction films of the past, Super Capers may not save the world but it's a whole lot of crazy fun.</p>