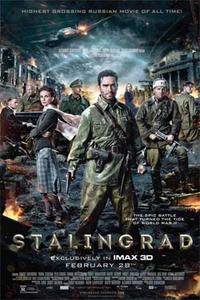 Looking for movie tickets? Enter your location to see which movie theaters are playing Stalingrad: An IMAX 3D Experience near you.

The top grossing Russian film of 2013 and first Russian motion picture presented in IMAX® 3D, Stalingrad is an epic look at the battle that turned the tide of World War II. A band of determined Russian soldiers fight to hold a strategic building in their devastated city against a ruthless German army, and in the process become deeply connected to a Russian woman who has been living there. In Stalingrad, directed by Fedor Bondarchuk, the scale of the battle contrasts dramatically with the human drama of the Russian soldiers, the few remaining civilians and their invaders into Stalingrad.