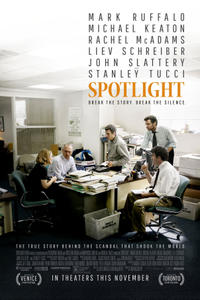 Looking for movie tickets? Enter your location to see which movie theaters are playing Spotlight near you.

A group of Boston Globe reporters uncovers a shocking cover-up that would rock the city and cause a crisis in one of the world’s oldest and most trusted institutions. SPOTLIGHT—which stars Michael Keaton, Mark Ruffalo, Rachel McAdams, Liev Schreiber, Brian d’Arcy James and Stanley Tucci—tells the true story of the Globe's tenacious "Spotlight" team of reporters who spent a year investigating allegations of abuse within the Catholic Church, ultimately revealing decades of deception at the highest levels of Boston’s religious, legal and government establishment and touching off a wave of revelations around the world. Directed by Academy Award-nominee Tom McCarthy, SPOTLIGHT is a tense investigative drama that tells the true story behind the scandal that shook the world.