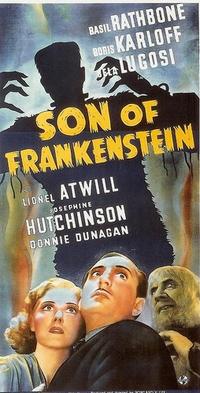 <p>SON OF FRANKENSTEIN, 1939, Universal, 99 min. Dir. Rowland V. Lee. Henry Frankenstein’s grown-up son Wolf (Basil Rathbone) returns to the family estate with his wife and son after many years. The laboratory is in ruins – nevertheless Wolf soon becomes enmeshed in his family’s nefarious legacy when he finds the dormant monster being looked after by a vengeful gallows’ survivor, the crook necked Ygor.</p> <p>GHOST OF FRANKENSTEIN, 1942, Universal, 67 min. Universal’s horrors became much more formulaic and by-the-numbers in the 1940s, but the creative juices were still amply flowing in this fourth time out with the Frankenstein monster. Director Erle C. Kenton helms this fast-moving tale of Wolf Frankenstein’s brother Ludwig (Cedric Hardwicke) trying to live down the ignominy of the family name. Too bad for him that Ygor (Bela Lugosi) and the monster survived somehow at the end of SON OF… Now they’re back knocking on his door for help in reviving the ailing monster.</p>