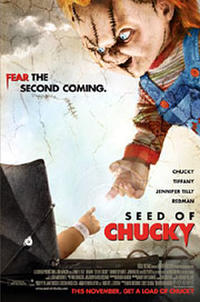 Looking for movie tickets? Enter your location to see which movie theaters are playing Seed of Chucky near you.

The killer doll is back! The all-new film is the fifth in the popular series of Chucky horror comedies. Making his directorial debut is franchise creator and writer Don Mancini. The film introduces Glen (Billy Boyd), the orphan doll offspring of the irrepressible devilish-doll-come-to-life Chucky (Brad Dourif) and his equally twisted bride Tiffany (Jennifer Tilly). When production starts on a movie detailing the urban legend of his parents' lethal exploits, Glen heads for Hollywood where he brings his bloodthirsty parents back from the dead.