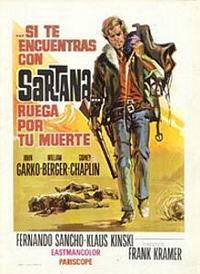 Looking for movie tickets? Enter your location to see which movie theaters are playing Sartana / Minnesota Clay near you.

SARTANA, 1968, 95 min. Dir. Gianfranco Parolini (aka Frank Kramer). Gianni Garko is a blond, blue-eyed, black-clad avenger -- a hustling gunslinger whose image blends Old West James Bond with a touch of the Gothic. A stagecoach is robbed, passengers are murdered and a succession of smiling, evil double-crossers and red herrings, among them Klaus Kinski and William Berger (FIVE DOLLS FOR AN AUGUST MOON), vie with Sartana in a search for the loot. “Often remembered as the best (of the series)…from Gianni Garko’s laid back and always smooth performance as well as the welcome cameo…of Klaus Kinski who gives a brief but memorable performance as Lasky’s right-hand man. <br /><br /> MINNESOTA CLAY, 1965, 90 min. One of the first westerns from director Sergio Corbucci (DJANGO, COMPANEROS) follows released, wrongfully convicted prisoner Minnesota Clay (Cameron Mitchell) as he tries to put his life back together and confront the high-living town boss (Georges Riviere) who betrayed him.