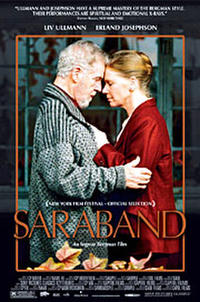 Looking for movie tickets? Enter your location to see which movie theaters are playing Saraband near you.

Following Johan (Erland Josephson) and Marianne (Liv Ullmann) 30 years after the events of "Scenes from a Marriage," this sequel finds the couple long since divorced and remarried. After Johan separates from his second wife, and Marianne loses her second husband, the ex-lovers try to reconnect. Meanwhile, Johan's son, Henrik (Börje Ahlstedt), is having problems of his own with his daughter, Karin (Julia Dufvenius), a cellist whose career plans don't match her father's expectations.