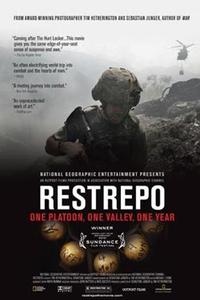 Looking for movie tickets? Enter your location to see which movie theaters are playing Restrepo near you.

From June 2007 to July 2008, Hetherington and Junger embedded with the soldiers of Second Platoon, Battle Company in the remote Korengal Valley in eastern Afghanistan, as they fought to build and maintain a remote 15-man outpost named “Restrepo” after a platoon medic who was killed in action. The filmmakers avoid all outside commentary and political context in order to present us war as it is actually lived by soldiers, through their own eyes and in their own words—the backbreaking labor, the deadly firefights, the boredom, the camaraderie.