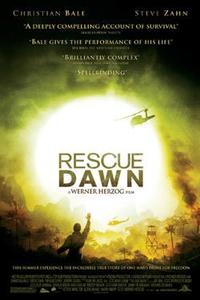 Looking for movie tickets? Enter your location to see which movie theaters are playing Rescue Dawn near you.

During the Vietnam War, German-born Dieter Dengler (Christian Bale), a U.S. fighter pilot, is shot down over Laos and taken captive by enemy soldiers. Interned in a POW camp, he and his fellow prisoners (Steve Zahn, Jeremy Davies) endure torture, hunger and illness while they await their chance to escape. Dengler has no intention of sticking around the nightmarish camp, so he begins to dream up an escape plan that takes his fellow prisoners by surprise with its savvy and audacity. Dengler doesn't even know where he is--but he knows with unwavering certainty that he must not stop fighting for his life. As he makes his way into the jungle, his journey will never let up, as it takes him from the bonds of fraternity to the brink of despair, to one of the most remarkable rescues in modern history.